Congratulations to Snow on his film "Holy Wine" that will participate in the International Film Festival in Sonoma, California 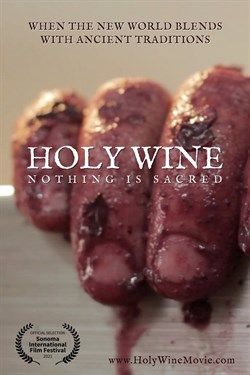 The film "Holy Wine" - a full-length independent documentary by Ron (Snow) Shay, a lecturer in the Department of Photographic Communication at HAC, will premiere at the Sonoma International Film Festival in California.
Snow's film deals with the story of Israeli wine.

Throughout the documentary, winemakers tell the story of Israeli wine and the challenges they face, only to discover that there is an inner strength between them and a power that thwarts the success of Israel's finest wines around the world. When the new world merges with an ancient tradition, nothing is sacred.

Holy Wine is a full-length documentary film that presents Israeli wine through a revealing introspection of the winemakers who make it and the often frustrating culture that surrounds it. The story of Israeli wine is rich in ancient history and tradition and begins in the Eastern Mediterranean. Solomon became captive to its deep roots and cultural heritage.

When winemakers struggle to create a new wine culture, they reveal an inner strength through their sons, which complicates their work with inconceivable antitrust and at the same time, thwarts the success of their finest wines around the world.

Ron (Snow) Shay has been working on movies, commercials and music videos for over 20 years and has been a lecturer in filmmaking at academic colleges for over 15 years.

He founded Snowderm Audio Visual in 2004, an independent film production house that he owns. He recently developed and directed an original series for American television called: Cutting Edge MD which aired on Amazon Prime. In "Holy Wine" Snow combines documentary cinema with a cinematic style and an unusual pace.

This year, the Sonoma Film Festival takes place online and you can purchase tickets and watch the film from anywhere in the world! The world premiere of "Holy Wine" will take place on March 25, 2021.